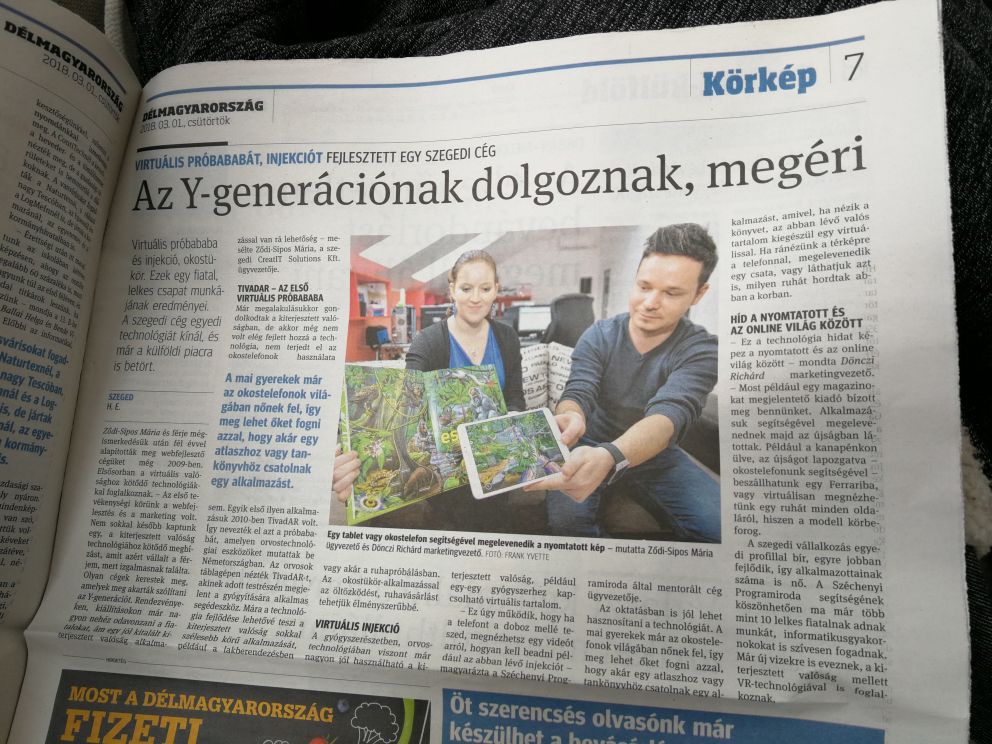 Recently, the local daily paper Délmagyar (Southern-Hungary) visited us for an interview with our managing director Mária Ződi-Sipos, and marketing manager Richárd Dönczi. Find the article below:

They Work For Millenials And It’s Worth It: CreatIT, a company located in the Southern-Hungarian city of Szeged, has developed a virtual mannequin and a virtual injection.

Szeged – virtual mannequin, injection and smart mirror. These are the results of a young and passionate team. CreatIT offers custom technologies and they have already broken into the international market.

Mária Ződi-Sipos and her husband founded their web development company back in 2009, just half a year after they met each other. Their primary focus is on technologies that are related to virtual reality: “We initially started with web development and marketing. Shortly thereafter, we received an order for augmented reality technology, which my husband accepted because he found it intriguing. Companies who wanted to appeal to millennials reached out to us. It has become incredibly hard to attract the younger generation to booths at events and exhibitions, but it’s possible with a well-designed augmented reality app,” said Mária Ződi-Sipos, managing director of CreatIT Solutions Ltd.

Although they had been considering augmented reality at their company’s conception, the technology was not yet sufficiently developed in the days before smartphones were in common use. One of their first augmented reality applications was TivadAR, launched in 2010. This was the name of their mannequin, which they used to demonstrate various medical technologies in Germany. The doctors watched TivadAR on tablets and saw how the medical appliances appeared on a given part of its virtual body. Since then, the advancement of technology has made it possible to use augmented reality on a much wider scale, such as for furnishing a home or trying on clothes. The smart mirror app makes getting dressed and buying clothes even more exciting.

On the other hand, augmented reality has already found its place in pharmaceuticals and medical technology, for example by linking virtual content to medications.

“It works like this: you put your phone next to a box of, for example, injections. Then you can watch a video about how to inject yourself with the medicine in the box”, explains the managing director of CreatIT, which was mentored by the Széchenyi Program Office.

Technology is also extremely useful in education. Today’s children grow up in a world of smartphones. We can capture their attention by linking an app to a textbook or an atlas. When they look at the book through the app, virtual content complements the physical content. For example, when they look at a map through their smartphone, a battle comes to life onscreen, or they can see what kinds of clothes people wore in that era.

A Bridge Between the World of Print and the Online World

“This technology bridges the gap between the world of print and the online world”, said marketing director Richárd Dönczi. “For example, we just got an order from a magazine publisher for an app to make print content come alive onscreen. So you could be sitting on a couch, turning the pages of the magazine and your smartphone would let you you climb into a Ferrari or see a dress from every angle since the virtual model can turn around.

This Szeged company has a unique profile. It’s growing day by day, and so is the number of its employees. Thanks to the Széchenyi Program office, the company currently provides jobs for more than 10 eager young minds, and they also take IT interns. In addition to their augmented reality work, they are branching out into new territory with virtual reality technology.